Temperatures are dropping, spirits are lifting and I can’t think of a better way to start the advent. Two days we had. Two days to make the best of this little spontaneous getaway, to escape the exam pressure and socialite expectations. I had dragged my housemate with me when I saw tickets for the price of a moderately sized book. He hadn’t had a choice, he had never been and I couldn’t wait to go again – to go home, one would almost say. And now we’re here, in the middle of London, at breakfast in the Phoenix hostel. With tea, toast, and no solid plan whatsoever. We would walk wherever we could, take the tube every once in a while and see where the city would take us. Excited to go and explore, we finished our breakfast, put on our coats and walked into the cold. Facing the brisk British air. 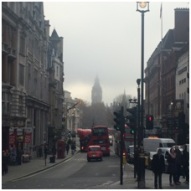 We decided to take the tube. “Where to? Let’s go to Piccadilly Circus!” And so, we went. A short ride later, we walked into a buzzing Piccadilly. People were walking to work, browsing the shop windows. The air was filled with chatter, music and the faint purring of cabs. After admiring the small Times Square-esque presentation, we turned into the nearest street and started walking. First to the National Gallery, then to Buckingham Palace and onwards to the House of Parliament. The city was dressed in mist and Christmas lights while we moved from shop to shop, looking for trinkets to take ho

me. Strolling through streets and over squares, we watched the abundance of Christmas lights and decorated trees. But the fairy lights were not the only lights that accentuated London’s beauty. Once in a while, if you looked closely, you could spot a celebration of love in the traffic lights. Little green men and tiny androgynous people encouraged the pedestrians to be themselves and be proud of it. Expressed in red and green they might have spread the Christmas message more than any bauble or garland did.

Having got the sightseeing out of the way, we crossed the London Bridge and roamed the south bank. We dropped into the Southbank Winter Festival and warmed our fingers with a well-deserved cup of mulled wine, meandering toward Tate Modern. There, we held an embarrassingly long photoshoot, admiring the blue wall onto which our profiles were projected. We exhausted ourselves looking at the beautiful and sometimes strange works that were displayed in the museum. 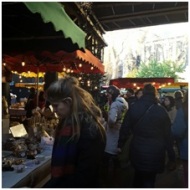 It had made us hungry, and so we continued our way along the banks of the Thames and towards the one place I knew would offer us a range of delicacies equaling a Hogwarts Christmas: Borough Market. Unable to resist the appeal of the Shakespeare Globe, I may have delayed that journey a smidge to marvel at the feast of Shakespearian comedies and tragedies displayed there. As expected, the roofed-in Market place was filled with cakes and chutneys and sweets and spices as far as the eye could see.

We picked up a pulled pork sandwich and drooled over the many treats Borough offered. Had the line not been so long, I would have surely ordered a coffee at one of my favorite coffee companies, Monmouth. 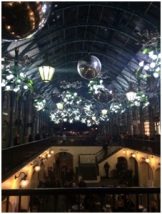 We had time for one more exploration before dinner so we decided to go to Covent Garden. Even after sunset the market was full. Light installations covered the walls and floors in illuminated polka dots, the shops invited us in with all sorts of delicious smells and appealing sights. Clothes, perfumes, even a Moomin shop. I wonder what couldn’t be found in the Garden. The enormous Christmas tree in the courtyard was the cherry on top of a wonderful day filled with walking, shopping, talking and some more walking. It was time for food again. Wanting to avoid the top prices of central London, we took out our Oyster cards[1] once again and looked for a stop that sounded appealing. That turned out to be Notting Hill Gate. We found a dainty little pub and ordered fish and chips and a cider. The pub was covered in garlands and stars.

There was a Christmas tree near the door and in the corner a group of friends was having their own, quite early, Christmas dinner, Christmas crackers and all. Turns out we didn’t dodge the high prices that much, but it was delicious. Completely cream crackered (which is Cockney for knackered) we returned to our hostel and gratefully fell asleep. 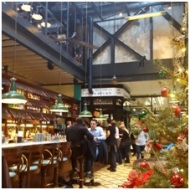 After a good night’s sleep, and some tea and toast, we battled the cold again and made our way to the underground to emerge at Oxford Circus. We could not leave London without having set foot on Oxford Street. The high street had everything one could possibly wish for. From luxury teas to semi-decently made clothes. Oxford street had something for everyone, and everyone seemed to enjoy their time browsing the shops under the enjoyment of the plentitude of fairy lights above their heads. However, as the morning went on, our hands turned cold and our feet grew tired. We were in for some heat, and what better way to get warm than with some wholesome Indian food? We travelled to King’s Cross Station and went for lunch at Dishoom. This Indian restaurant is based in an old warehouse, where they prepare mouthwatering dishes and thirst quenching drinks for you in a spell. The tikka masala naan roll with chili jam could not have done a better job at getting some warmth back into us again. 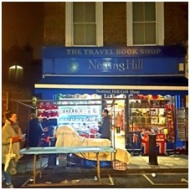 We decided to return to Notting Hill Gate again and roam the stalls of Portobello Road for a bit. We probably would have arrived there sooner, had I not dragged us back to King’s Cross and geeked over Platform 9 3/4 for longer than I would like to admit. In proper tourist style, I ended up buying a scarf in my house colours (Gryffindor) and thoroughly embarrassed my housemate by spending too much on it. Gallivanting on the Portobello market, we hypothesised living in one of the many coloured houses that lined the street and opening up a bookshop, much like the Travel Bookshop from

Notting Hill that we passed. It always had been one of my favourite films. London was filled with the most beautiful, quirky little bookshops, like the one on Bell street. One more wouldn’t be a problem, right?As we continued our way down the road, we stumbled upon the Hummingbird Bakery. So many delicious looking cakes were displayed in the window that we were compelled to buy some Christmas Spice cupcakes with chai frosting.

The sweet treat could not satisfy us too long though, so we went for some bangers and mash (that’s sausages and mashed potatoes for you) and decided to finish off the day in Hyde Park, where the Winter Wonderland Christmas festival was on. Even in the dark, the park was full of people, skating on the ice rink, drinking mulled cider and excitedly waiting in line for one of the many attractions. The park was a beacon of light in a time of darkness, where orange men drive us apart and cold feelings seem to trump our

bonds of unity and acceptance. Reminding us that happiness can be found even in the darkest of times if one only remembers to turn on the light[2]. It was the perfect ending to a perfect getaway. Not having a plan turned out to be the best plan we could have had for exploring London. With the pound value dropping and the festivities in action, now is the best time to visit London.