The films that mess me up the most are films that manage to turn realistic events into horrific experiences. I’m Thinking of Ending Things does this splendidly, a psychological thriller where there are no demons or witches, but you end up wishing there were because that would make things a lot simpler. The fact that it’s set during a snowstorm makes you feel as trapped in the terror that is this storyline as the characters seem to be. It’s been two years since I’ve watched it and I still haven’t gathered the courage to re-watch it, that’s how bad this film disturbed me. I will, however, do that this Halloween, and I recommend you to do the same if you’re looking for a truly unhinged story. 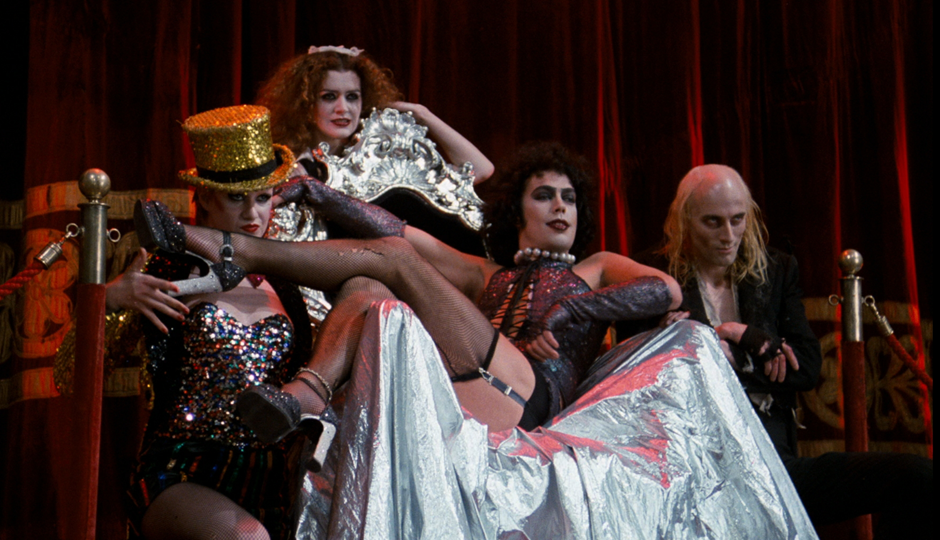 I will be the first to admit that I am a complete scaredy-cat. Jump scares and horror movies (yes, even when they’re comedy horror) terrify me just thinking about watching them. Safe to say, I was not planning on ever watching something with “horror” in the title as a rule. However, life happens and last year I ended up watching The Rocky Horror Picture Show. If you, like me, are unable to handle watching any kind of horror, I can assure you that this movie can be enjoyed even by cowards like us.

The movie is a musical horror comedy about a newly engaged couple that get stranded by a flat tire on a rainy night. Looking for a telephone to call for help, they are offered shelter for the night in a nearby castle- owned by a queer, mad scientist who creates a man in his laboratory. As a staple of the queer movie scene, it is filled with great outfits and songs, including the iconic “Time Warp” and “Sweet Transvestite”. Also, Meat Loaf is sort of around.

I admit it does have some gory scenes but the movie really isn’t scary and honestly, I was too distracted by trying to figure out the plot to really pay attention to any blood that might have been there. Overall, it is a great Halloween movie to watch if you’re trying to get a little bit into the scary undead vibe but don’t want to sacrifice your good night’s sleep.

Ever wondered if there were monsters behind your closet doors at night? Monsters, inc. explores a world behind your closet door in a funny and sweet way. This is the cartoon to watch on a scary night and at the end you’ll want to hug the monsters instead of running away from them. I watch this movie yearly around halloween as my guilty pleasure, so if you are anything like me and don’t like movies with a lot of jump scares or gore, Monster, inc. is something for you.

Netflix’s limited series The Watcher has been a hot topic since its release on October 13th of this year, so it’s probably not a surprise that it has made it on this list. Besides the beautiful cinematography and well-structured plot of episodes that always end on cliffhangers, what makes The Watcher so terrifying to me is that it is based on a true story. As I watched the episodes, I kept recalling that a real family actually went through all of this inhuman taunting and it gave me the creeps knowing that someone deliberately put another family through this paranoia. Knowing that this is a retelling of a story that actually happened makes it much more terrifying because it reminds me something insane like this can happen to anyone. So if you are in the mood to watch a series that will make you triple-check all the rooms of your house and lock your doors before bed, The Watcher is definitely a good recommendation for you.

Based on Neil Gaiman’s novella, Coraline follows the adventures of the protagonist as she moves into a secluded house with her parents and starts exploring her surroundings. Despite being categorised as a family/fantasy film, even at the age of 21, Coraline still gives me the creeps. But then again, I am easily spooked. The iconic button eyes of Coraline’s family in the parallel universe is definitely the most unsettling feature of the film. Whilst the darker motifs of appearance vs reality distress the audience, the most uncomfortable scene for me is when Coraline casually lays out cheese to attract mice and then proceeds to fall asleep. How could you sleep knowing there are mice scurrying around your bed? But in all seriousness this is an intriguing and visually interesting fantasy film which pulls you into a bewildering world of imagination. It is a perfect watch for someone who is not a fan of gore but still wants to experience the Halloween spirit.

I really hate horror movies. The only two remotely scary movies I have ever watched were Coraline, from which I am still traumatised, and The Orphan, from which I don’t remember a thing because I spent half of the movie hiding my eyes with my hands. Coming up with a horror movie recommendation was quite hard because I very obviously don’t know any. However, despite not being a horror movie, I think that Spirited Away has a complete Halloween vibe between the strange ghosts and the witch. The movie begins with a ten-year-old girl named Chihiro and her parents on their way to their new house. They end up in front of a tunnel through which their car cannot pass and decide to see what is at the other end. Although the beginning doesn’t hint at any supernatural elements, things get stranger when her parents find a banquet full of food and get transformed into pigs after eating too much. From there, things will get more and more bizarre. I won’t say anything more except get ready for a great plot and outstanding animation.

With another horror movie named The Invitation being released just weeks ago, I feel the need to remind any and all I can about this 2015 movie. This film is an absolute masterclass in tension, if Hitchcock were alive today, this is the type of movie he’d make. Hitchcock once said there is no real horror in the explosion, only in the ticking of the bomb, and while some movies still have the occasional brilliantly tense seen, the type that makes you chew of your nails so frantically you start bleeding onto your popcorn, there are only a few movies that manage to maintain this awful, gnawing dread for its full runtime. For the full hundred minutes this movie lasts, you are on the edge of your seat for all of them, and probably the three weeks after it ends as well. The opening manages to fully  place the viewer in the protagonist’s perspective, inserting them under his skin and behind his eyes, and then, along with him, we venture into a steadily growing feeling of unease turning to terror, all the while being too polite to scream ‘stop, Jesus, stop’ despite every muscle in our bodies wanting to.

My Halloween recommendation is a quite unique choice because it’s not the scariest movie you would choose to see. It’s not something that will terrify you to the bone however you might have a few problems with falling asleep after that. What I’m describing is the mind-blowing production directed by Christopher Nolan “Inception” (2010). It’s not a classic choice for a Halloween and you could watch it practically on any day, yet if you feel like reaching for something more serious and mind boggling then Inception(2010) is definitely the right choice. The movie projects to the viewer a different, maybe even new, perception of dreaming, the movie is a form of lens of what could be possible within dream sharing technology. I won’t spoil what exactly happens because I think the experience of interpreting the plot is a part of the exciting experience of watching the movie. For sure if any of you feel like questioning the existence and exploring the possibilities of the mind to get creeped out on a different level than spooky monsters, definitely reach for this production. Naturally, I have to mention that all Leonardo DiCaprio fans will obviously be drawn to this position, but don’t forget about the rest of the remarkable cast including Cillian Murphy, Elliot Page, Marion Cotillard, Joseph Gordon-Levitt and Tom Hardy in main roles of the production.