In 1986, a developer at Nintendo with a love for Greek mythology pitched the concept for his game to his higher-ups: one that would combine the key traits of popular titles at the time. Set in a world inspired by Greek myth, the game follows the story of a flightless angel named Pit as he gathers three sacred treasures for his goddess Palutena, who is being held prisoner by her evil sister Medusa. Kid Icarus was built from the ground up around its gameplay, not its plot, and the story was never meant to be a retelling of a specific Greek myth at its core. However, intentional or not, the game actually portrays the story of Perseus rather accurately, but in a way that truly connects with a contemporary audience.

It’s important to have a close look at the creation of Kid Icarus, as it largely affects the scope with which we examine it as a myth. In 1986, the most popular games at the time were Metroid, a platformer like Mario Brothers where you shoot enemies and make your way through a linear dungeon, and role-playing games (RPGs) like The Legend of Zelda, where you collect tools to change up your experience and level up as you progress. Toru Osawa came up with a concept that would combine all these elements, and pitched it to his higher-ups, since the atmosphere in the company at the time was that anyone could make their very own game. He was given the green light and told that the game would have to be done by December, but he didn’t quite realize that that meant he was expected to make it all by himself, leaving him to work on it alone until help arrived in August. Osawa would take inspiration from Greek Mythology, but it was his game at heart, as he added his own sense of humor with eggplant witches and specknoses. The game isn’t story-driven at all, it is largely focused and built around its gameplay, but let’s examine the story as revealed in the game’s manual and the game itself.

The story of the Kid Icarus goes that Palutena, the goddess of Light, and Medusa, the goddess of Darkness, rule together over ‘Angel Land’. Palutena loves the humans while Medusa hates them, turning them to stone, which angers Palutena. She turns Medusa into a hideous monster and banishes her to the Underworld, where Medusa begins to create an army that is strong enough to best Palutena’s. They take her prisoner, turn her army to stone, and hide the Three Sacred Treasures with the three strongest generals. Pit, a flightless angel and a member of Palutena’s personal guard, is imprisoned in the Underworld. Palutena uses the last of her strength to send Pit a magical bow and arrow, and Pit escapes and begins his quest to free Palutena, spanning through the Underworld, Overworld, Skyworld, and finally the Sky Palace, beating Medusa’s commanders and gaining a Sacred Treasure at the end of each world. Only once all three are collected can the seal on the Treasure’s caskets be undone and used to traverse the Sky Palace. The three Sacred Treasures are the Mirror Shield, the Arrows of Light and the Wings of Pegasus, which Pit uses to defeat Medusa in the finale, shattering her eye and rescuing Palutena. Based on how well the player did throughout the game, Palutena will reward Pit differently, as she could give him a farmer’s hat or turn him into a muscular hero as seen here. 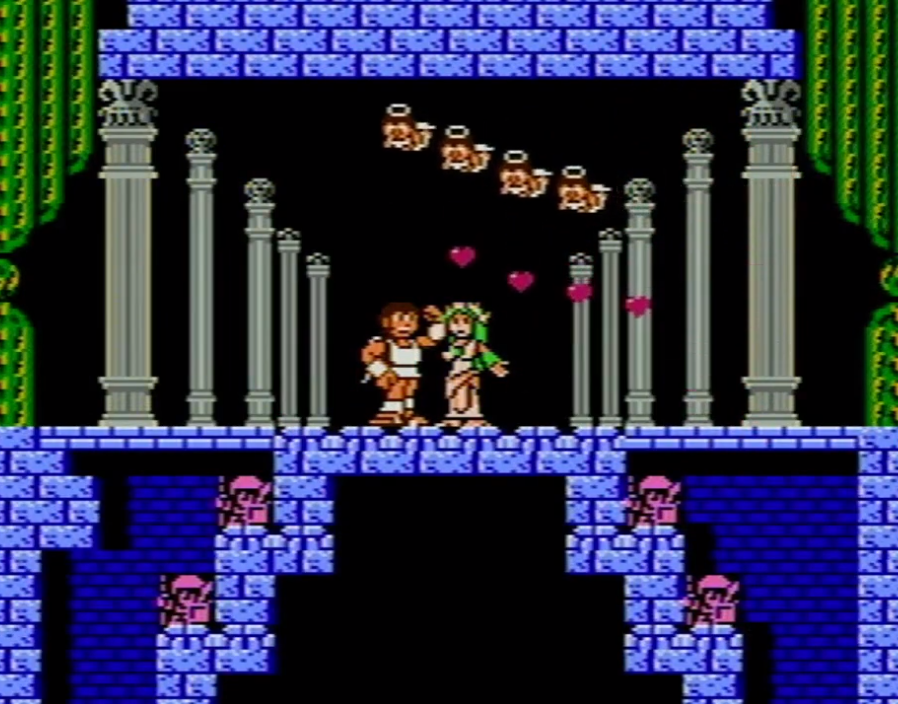 When summarized in this manner, the story of Kid Icarus begins to loosely resemble that of Perseus, the hero who was instructed by Polydectes to bring him the head of Medusa. According to the Bibliotheca, on his journey, he is guided by Hermes and Athena, and he is given the tools he needs to kill Medusa by nymphs and gods, namely winged sandals, the kibisis and the helmet of Hades. He finds Medusa and the other gorgones asleep, and to avoid their petrifying gaze, he keeps his eyes on the reflection in his shield with Athena guiding him and strikes when he sees Medusa. Perhaps the correlation is rather loose, but knowing that Athena was the one who turned Medusa into a hideous monster in the first place, and the Japanese title of the game is Myth of Light: Palutena’s Mirror, referencing the myth’s ending. Reading the Mirror Shield as a reference to the myth, and the wings that allow Pit to fly to Medusa in the final stage, the same way Perseus flew to the gorgones in the myth, lead me to believe that Kid Icarus can be ruled an adaptation of the myth.

It can be argued that Kid Icarus is simply a video game that is loosely inspired by Greek mythology, and coincidentally resembles the story of Perseus, and perhaps that is true. Toru Osawa’s original vision for the game was mostly founded on its gameplay, rather than its plot. Considering all of this, I believe that even if it was not Osawa’s intention, he has still created a very contemporary yet aptly fitting retelling of the story of Perseus. When it comes to stories in video games, all story progression must be accompanied by a playable level and all must be earned to give the player a sense of fulfillment and involvement in the plot. Pit is given the bow and arrow by Palutena, the gods smile upon him and give him the tools he needs to succeed in his quest, yet it is Pit, and by extension the player’s, own skill and perseverance that will save Palutena. This paired with the fact that Kid Icarus was well-known for how difficult it was, as the slightest misstep would send Pit tumbling back down to the beginning of the level and the player would be forced to start all over again, living up to the game’s title. In modern times, consumers do not resonate as much with stories of gods smiling down upon a hero and granting him heavenly treasures, they feel more connected to a story of an unlikely hero, given a chance by the gods, and succeeding by his own strength and skill, and this connection is enhanced even further by this retelling being a video game, connecting the viewer and the hero through their controllers.

This leaves us with one big wax-winged elephant in the room, being that Pit resembles other mythological figures. Rest assured, I haven’t forgotten. Next month I will be covering the sequel to Kid Icarus and the resemblance Pit bears to Eros, better known as Cupid, and of course Icarus himself.

APOLLODORUS. The Library of Greek Mythology. Translation by Aldrich, Keith.