Credit for the images in the article goes to Shedworks.

It is a fresh new year for Writer’s Block with a wholly new board, and so it truly is a new beginning for us all. As we are finding our feet and discovering how we will work as a team, how to meet the expectations that come with the name, as well as our own expectations, I have also begun searching for my voice in these articles. I am used to writing fiction, rather than non-fiction, and as I have been messing about with this article (after a failed draft or two,) I have found that the voice I have etched out in fiction over the years cannot simply be translated to non-fiction. So here I am, beginning on a search.

That’s a lot of “beginnings”. Yes, that word has been stuck at the forefront of my mind ever since playing Sable: A recently released game developed by Shedworks, in which you take on the role of a young nomad—the titular Sable—of the Ibexii tribe who is deemed ready to begin their rite of passage into adulthood, known as the Gliding. What is the Gliding you might ask, and if so, thank you, because that is the exact question I am about to tackle. The Gliding is a personal journey of discovery through the varied desert lands that the Ibexii inhabit. You are to go free and roam where you please, to put yourself in service of those that are in need of a helping hand and discover what role you would like to assume in your tribal society. To aid you in this (and for the sake of making a fun video game) you are given that holy trinity of items for any journey into adulthood: a bike [✓], an incomplete map [✓], and a floating device [✓]. Classic.

Of course beginnings are not just about the new goodies you might receive and the new trails you are about to blaze, they must also entail an ending of sorts. Beginnings start with a loss. For me, I am learning that beginning at Writer’s Block has meant the loss of my comfortable writerly voice. In the case of Sable, beginning means their goodbye to youth, to the safety of home. Loss is marked by the departure of your tribe, before you even set out on your journey. While you are off to show your worth at the temple of Rohana by solving a platforming puzzle (as you do), your people have packed up and gone, leaving you no more than the last smoldering embers of the campfire and your hastily scrapped together bike. This beginning you start alone. 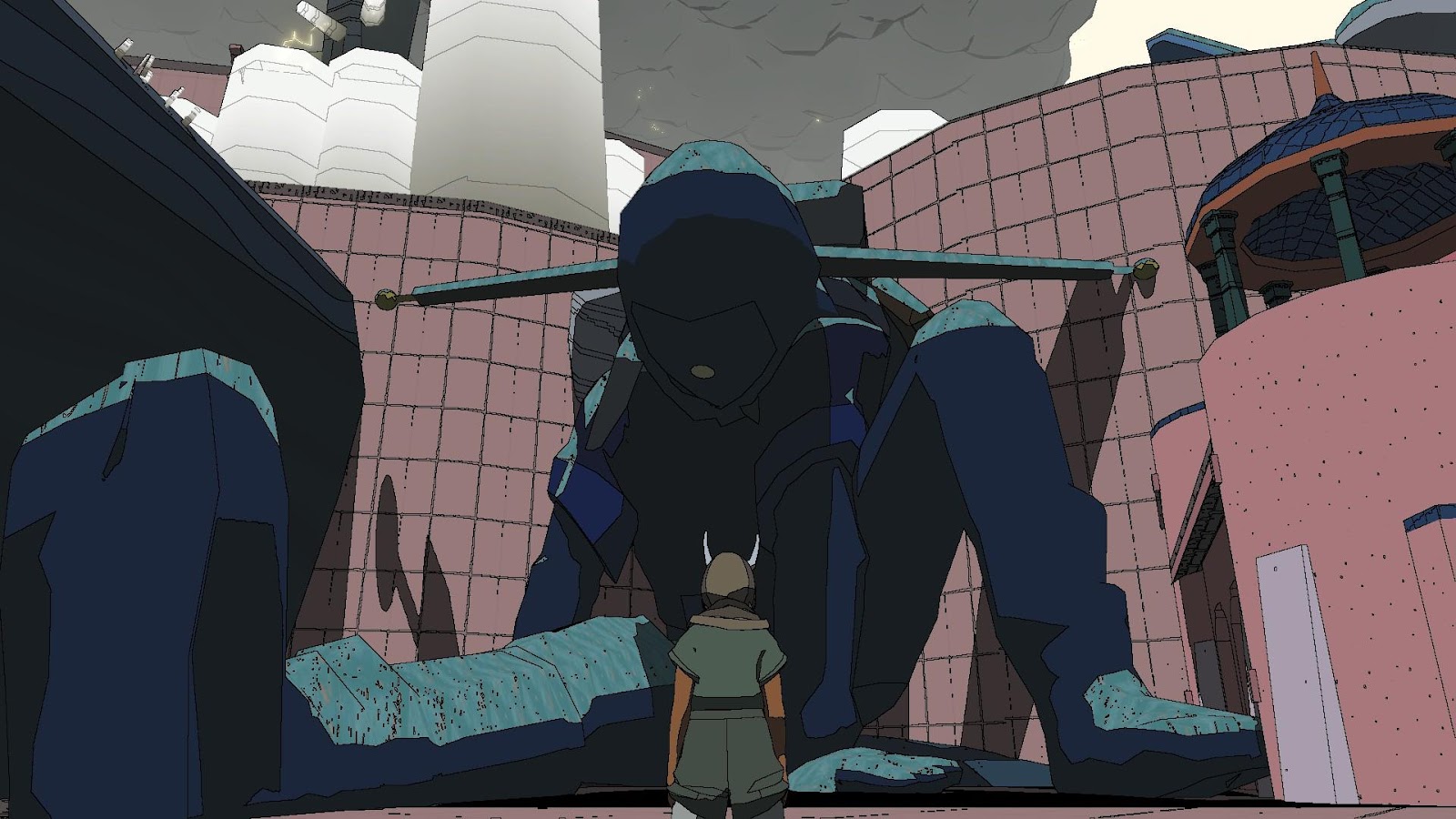 So where will you go? The game subtly nudges you in certain directions through its world and quest design, but really Sable’s answer is: wherever you damn well please.

That sounds too easy, perhaps even too aimless for those of us who have grown used to the way games push you in different directions all the time through map markers, quest reminders, icon-filled mini-maps and more in a desperate move to ensure that you always know that there is an activity waiting for you; so that you may always progress. And, yes, it is too easy, because there is a goal to your gliding: you must earn badges from the various practitioners that make up the nomadic tribes of the game. Earn three of these from one profession and you can let a mask be cast that will allow you to take up that role. At the end of your gliding you are to choose: which mask will you don?

This prickly conceit aside though, Sable provides an open playground in which you are encouraged to begin walking many paths simultaneously.

I thought this particularly apt to Sable’s idea of what makes a good beginning to adulthood: open exploration; following desires not out of a lack within you, but as a positive openness to what is around you. Not so much: I need this and so I go here, but rather: I see this and I want to get more of a sense of it. A less functional way to conceive of desire, driven more by curiosity than expectation.

When I come across large circular structures drifting in the sky I have very few expectations of what I might gain from going there as an in-game goal—a nice view perhaps—but there is a simple desire to study it more closely, to come into connection with that place. At its strongest, Sable understands that such connections are not necessarily built on knowledge either. As I manage to climb a hill and leap over to the circling structures, I find covered walkways with little discernible purpose. There is not enough there to make sense out of it, to give it a coherent history. But I do learn the space, its stony surfaces and rough textures, I feel the way it floats and circles, the way it is situated in the landscape. A connection is made, one whose value is no more expressible than the building’s purpose. This is the core experience of Sable to me: building connections outward, letting the world impress upon you, and when the desire is satisfied, moving along.

In doing so Sable has one more lesson to give: patience.

Partly, this patience is induced by the large distances that are to be traveled through expansive tracts of desert land between landmarks, which supplies the game with an ebb and flow. Inspired by the comic style of Jean Gireaud, better known as Moebius, colours are on vibrant display only to be drained when covered in shadow.  As night falls all colour seeps out of the image and instead of darkness you are greeted with muteness. In effect, this gives the game two drastically different states between which it cycles because the act of observation is so front and centre in the experience. Oftentimes when I would come across a sandy ruin or some precariously placed village in the bleak night I would attend to whatever quest I might have there and then wait. Wait for the light of day to return the bright colours to the screen, allowing me to see the sights with new eyes. 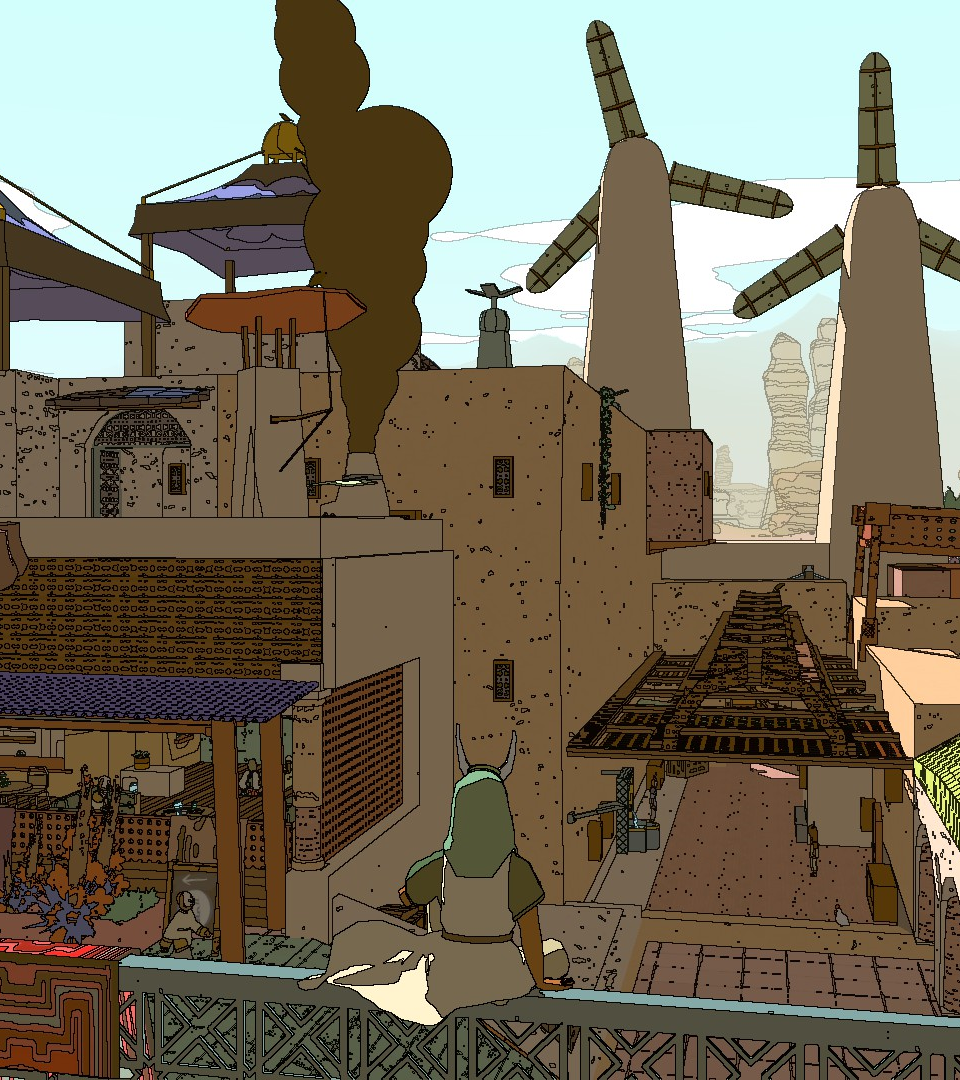 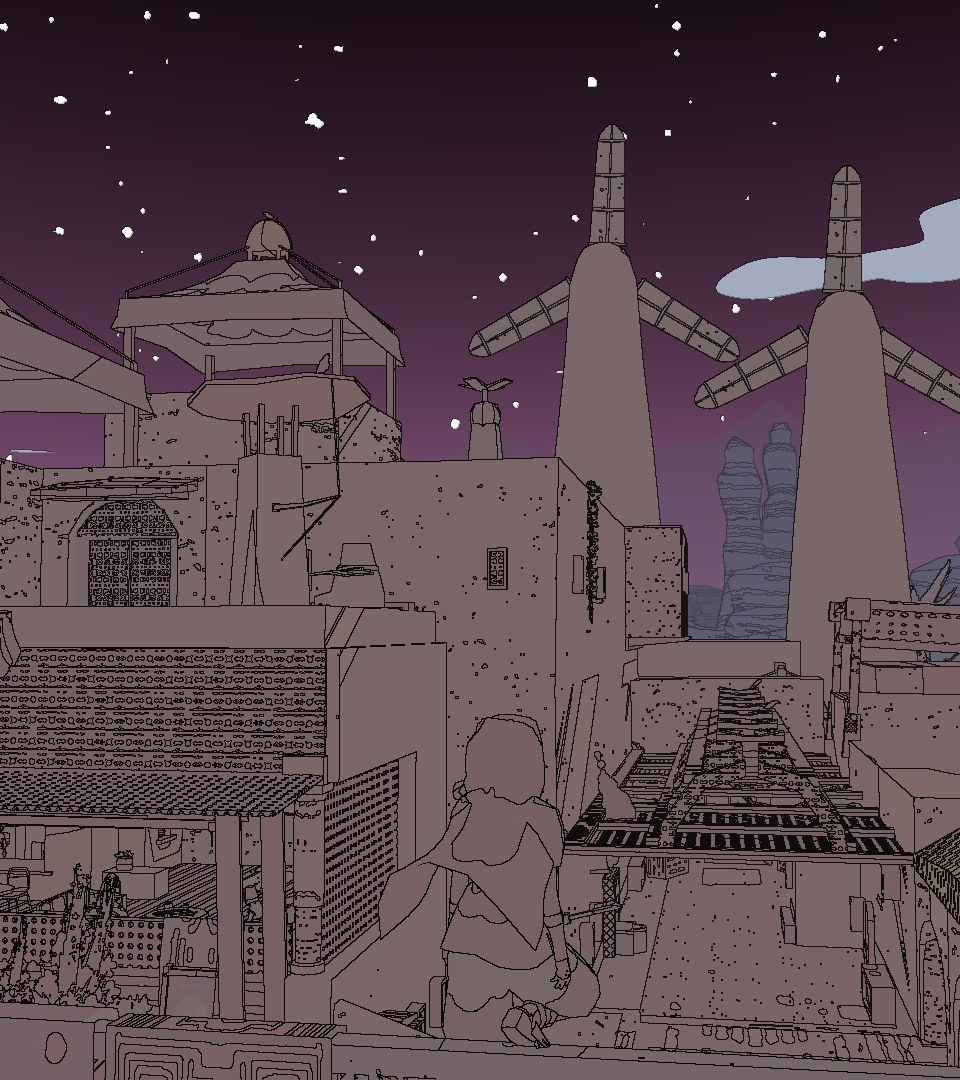 Neither you nor the rich colour scheme will always arrive instantly. Sometimes the pleasure in what you do is derived from your capacity to wait and see. These aren’t profoundly new insights, but they are remarkably easy to forget. By living life in terms of progression it might feel like beginnings are merely a short stage that we pass and never return to, but—through its cyclical nature—Sable served as the perfect reminder for me that beginnings are a constantly returning occurrence.

Now for the prickly bit: the ending that looms large over your journey. The ending that promises to deflate your open-ended travels by forcing you into a choice, by asking you to close off so many paths and proceed by donning one mask and pursuing one role. It seems antithetical to the kind of existence the Gliding offers. Though the ending might gloriously subvert this expectation in some exciting way that would have me jumping up and down in my seat, I could not bring myself to go through with that ending, and so I guess that my Sable continues to glide on in perpetuity; never settling, forever drifting on. Not the happiest image either perhaps, but right now I find more value in that than the normative picture of adulthood that the Ibexii tribe offers.

So this is the way I would like to begin at Writer’s Block: not by obsessing over my progression, whether it is in writing non-fiction or editing articles, but by looking at every opportunity as a start, and by allowing my curiosity to lead the way not to one stable voice, but to a gliding voice.

Well, that certainly looks like a nice sentiment on the page. Let’s see how it goes.