While I would like to commence this second article by restating that I am indeed most definitely not a heterophobe, and that I, frankly, find the very suggestion profoundly offensive, I hereby gladly present to you, dear reader, a second collection of films that are morally sound and which happen to also be predominantly heterosexuality-free. Coincidence? I couldn’t possibly say.
Now, this half-hearted assurance might cause you, astute observer that you are, to make the comment: “I don’t know, that still seems kind of sarcastic.” To this, dear reader, I would like to answer: “I have no idea what you’re insinuating. I have lots of friends who just so happen to be straight, and just because I’ve refused attendance to their so-called ‘marriage ceremonies’ on religious grounds twice now that doesn’t mean I am anything but hetero-supportive.”

All disclaimers aside, with this article I would like to present a second group of films I have collected like hidden roses amidst the forest of heterosexual logjammin’ that our depraved culture’s secular media has become. It once again took me many a sitting, many a packet of crisps, and most certainly many a fast-forwarding whenever two opposite-sex characters gave each other ‘come hither’ looks – which, I don’t think I need to tell you, dear reader, happens way more often than it should. Still, the result of the project has left me feeling rather satisfied. After all, while I am still in intensive therapy to recover from the exposure to all of that undiluted heterosexuality – not to mention three different antibiotic treatments for my eyes, ears, and heart, respectively – now at least you have the insurance of a safe selection of films guaranteed to give you as minimal confrontation as possible to, as the kids call it these days, all of that hetero-on-hetero hibbidy dibbity.

The Miseducation of Cameron Post (2018; directed by Desiree Akhavan)

In many ways almost a remake of the cult classic “But I’m a Cheerleader!” (1999), The Miseducation of Cameron Post tells the tale of a young girl who, being found by her conservative relatives to be a little less than fully heterosexual (to say the least), is quickly carted off to ‘God’s Promise’, a conversion camp where young Christians can get themselves spiritually rewired at the reasonably low cost of lifelong trauma.
The big difference between these two films, however, is that while “But I’m a Cheerleader” is a comedy that attempts to parody the horrific experience that is conversion therapy with light-hearted, feel-good undertones, this particular film is a gritty, realistic take on what conversion camp was (and in many cases, still is) from the eyes of one of its pupils. Set in the 90s, this film has many things going for it: it has the stunning performances of our protagonist Cameron (played by Chloë Grace Moretz) and the Camp’s terrifying president, Dr Marsh (Jennifer Ehle); a moustache so terrible only a true ex-gay man would ever be seen wearing it; Christian rock and roll; gender-neutral forest hikes and a whole lot of pseudoscience. Seriously, if I ever hear the word ‘ice-berg’ again it’ll be too soon.
What this film comes down to, however, is an impressive story of how truly fragile the human mind can become if pushed hard and far enough, and how willing some people are to do exactly that, if it is what it takes to be accepted by those they love. At its end, I felt a profound sense of respect for the creators and cast of The Miseducation of Cameron Post, who were somehow able to convey a very complex set of impressions and emotions in so relatively small a space of time. A definite recommendation.

Sueño en otro idioma – I Dream in Another Language (2017; directed by Ernesto Contreras)

An interesting film, to say the very least, this Mexican romantic drama tells the tale of a young linguist by the name of Martín, who sets out for a remote village to try and establish recordings of its almost extinct local language: Zikril. Unfortunately, however, of the three remaining speakers, two refuse to even speak to one another, and when the third passes away barely a few days after Martin’s arrival, he is forced to find a way to reconcile the decades-old conflict between the two remaining speakers, slowly unveiling the past of these two men’s mysterious relationship. 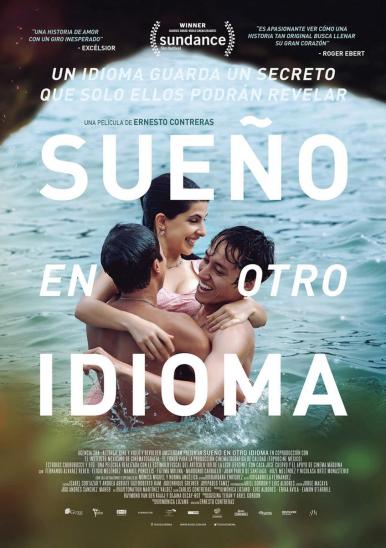 While this film is impressive in its portrayal of a sensitive topic, possessing a powerful starting half that weaves effortlessly between past and present, Spanish and Zikril, and Martín and his subjects of study (Isauro and Evaristo), it is in the second half of the film that its narrative suffers a rather unexpected twist, taking its theme from a realist domain into something more surreal. Its ending too, while intended to be bittersweet, somehow felt more bitter than it did sweet. While this does of course fit perfectly with the topic of localised language loss which this film attempts to bring to light, it leaves it far outside the category of feel-good endings, if that is what you were hoping to find.

Aside from this rather abrupt twist, the setting of this film is wonderfully executed. The characters feel real, the subject matter nuanced and its layering placed with utmost care. Sueño en Otro Idioma is most certainly one to watch, and Martín and Lluvia (heterosexual though they unfortunately are) aren’t bad on the eyes either.

Casual is a series which, despite its mostly heterosexual leads (I know, I know, going against the premise of this article here. But hear me out, okay?) completely blew me out of the water. It is clever, dark and incredibly funny, while at the same time being moving enough to occasionally force me to grab a hankie for my eyes – for my hay-fever, of course.

In any case, despite only one third of the leading cast being of the non-heterosexual persuasion, the way this series tackles the complex grey area of what sex and intimacy mean to us in contemporary society is beyond expected. In short, the series describes the time following Valerie’s divorce, as she and her daughter, Laura, temporarily move in with Valerie’s younger brother Alex. Together, the three navigate the expectations of their respective love lives, be it as a newly-divorced mother, a single man in his thirties or as a fifteen-year-old just starting to figure things out. The performances of, in particular, Michaela Watkins (Valerie) and Nyasha Hatendi (Leon) were extremely well done, able to convey scenes of both vulnerability and humor with ease, and I rooted for them from the very start.

The fourth and final season of Casual was released only last summer, and the gap between it and the previous seasons is noticeable. It took me a few episodes to get back into the series, the jump being undeniably difficult at first. However, by the time I was halfway in I was once more completely reeled in and eager for more. Please watch Casual: it is easily one of the best series I’ve watched all year.

God’s Own Country (2017, Written and Directed by Francis Lee)

Winner of the Sundance Film Festival’s World Cinema Directing award, this British romantic drama features a Yorkshire farmer’s son who, when a Romanian migrant worker arrives to help during the lambing season, ends up entangled in feelings he’s never before come to acknowledge to this extent. As he attempts to keep his family’s farm afloat, now he also must decide what shape this new-found romance will take within it.

The first and foremost thing about this film is its subtlety, though – as a warning in advance – the only respect in which this is not the case is its sex scenes. They are, to say the least, explicit, with male full frontal nudity at more than one instance. Now, in my personal book this is a huge plus for any film involving gentlemen as stunning as Josh O’Connor and Alec Secăreanu, but I can understand that the context of this film’s viewing largely determines whether that initial plus becomes a very quick minus. That is to say, you probably do not want to watch it with your parents.

Nonetheless, aside from being an absolutely beautiful film set in the Yorkshire heathlands, with breathtaking visuals of its barren hills, skies and vistas, and scenes depicting actual lamb birthings, the thing that truly warmed my heart about God’s Own Country was how none of the gays die! (Also, it has a generically blonde twink villain – callback to The Way he Looks, anyone?) In this sense, it is the British version of Brokeback Mountain we never deserved, but needed pretty badly. Does it have its flaws? Most certainly. Dialogue was slightly forced in some of the scenes involving Johnny and his university friend, Gloria. Also, while most certainly optimistic, the film’s ending might have benefited from a little more time to let the viewer savour it. Still, I confidently place this film near the very top of the Heterophobia Scale©. Between this and Carol I now finally have two (kind of) happily-ending gay romances that I can proudly present on my mantelpiece.

And there we have it, dear reader. Four more morally upstanding films to get you through this particularly difficult, particularly heterosexuality-saturated holiday month. May they bring you a ray of homosexual sunshine amidst the dark storm that is today’s secular media’s excuse for Christmas ‘family’ filmography. As always, I would advise you to avoid directly looking at any screen playing a straight Christmas rom-com, as it is certain to cause instant and probably irreparable psychological damage. If all else fails, know that locking yourself in the attic to watch Carol after any family dinner is a 100% scientifically proven [2] way to recover from heterosexual overexposure. In the meantime, know that I will be on the hunt for some new films to get us all through 2019’s first winter months; by the looks of the Aquaman trailer I keep seeing on my Youtube ads it’s looking like we’ll be needing a couple of extra gay ones to pull ourselves through that one.

View all posts by David Slot