If you’re anything like me and have no problem with heterosexuality whatsoever, yet find yourself letting out an involuntary gasp of shock whenever you see two individuals of the opposite sex as much as touching hands, then you probably share my dilemma of what to watch on television. After all, no one can deny that in the past few decades heterosexuality has become more and more prevalent in mainstream media, and it is now hard to turn on any program without being confronted with the sight of two heteros bumping uglies on some seedy excuse for a mattress at one point or another. While I repeat that I am in no way heterophobic – I in fact have many straight friends, and probably at least one family member, who swing that way – this does not mean I have to be comfortable being exposed to it all the time, especially when in the privacy of my own home, from the comfort of my bed, while eating ice-cream, wearing sweatpants and picking my nose. And quite honestly, television just isn’t what it used to be anyway: one moment you’re watching a mildly interesting cop drama and then the next thing you know two straights are locking lips and rubbing privates on the nearest piece of furniture. It’s a disgrace. So, to all of you fellow movie lovers of class and moral uprightness, know that I have made the ultimate sacrifice of watching a whole stack of films and series over the course of the past year. Some were great, others terrible, but I was relentless in my quest. And, after painstaking hours of effort and more than several moments of intense heterosexuality-induced nausea, I here have a list of films and series you can watch with minimal exposure to any of that hetero hanky-panky. Trust me, you’ll thank me later:

Carol caused quite a big stir back when it came out in 2015, and it is a wholesome, critically acclaimed delight. Also, it has Cate Blanchett in a lead role, which says enough about this entire work already. Based on the book by Patricia Highsmith: “The Price of Salt”, Carol tells the tale of a young saleswoman who falls in love with a recently divorced customer. Together they begin a romance that involves a mid-winter road trip, lots of fur coats and Blanchett hair flips, a really big train set and a clingy ex-husband who needs to just get it together already and sign up for Tinder or something. If I recall correctly, no straight couple as much as kiss in this film (there is one straight kiss, technically speaking, but it’s not really Therése’s happiest moment, so doesn’t really count), which meant I could watch it without having to worry about the state of our culture’s rapidly declining moral values for once.
Aside from this minor flaw, the soundtrack is beautiful, costume design exquisite and the many soulful shots of the cold, austere winter that is gay rights in 1950s New York will leave you feeling happy to be alive right now and not half a century ago. Additionally, no lesbians die in the process of the plot, which is as surprising as it is refreshing. Truly, this is the ideal film to watch with a date on a cold December night, especially if either party has brought hot chocolate and you’re both comfortable ugly-crying in front of each other. 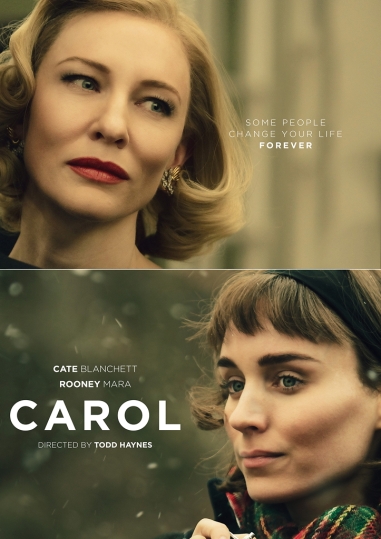 If you’ve ever wondered what it might be like to watch a Norwegian, depressingly grim spin on an X-men coming of age story, mixed in with lots of teenage lesbian angst and two crazily religious parents, then you will find exactly what you’re looking for in Thelma.
In short, this film tells the tale of a young girl who leaves her home for university for the first time, only to start having odd seizures, as well as a growing fascination for a female student. And trust me when I say that Thelma has a lot going for it. It has flocks of crows, almost daily over-controlling parental phone calls, mysterious childhood secrets, a swimming pool that is hella creepy, a beautiful opera scene and lots of seizures. Seriously, a lot of seizures, and they’re pretty  uncomfortable. Epilepsy is one of the themes explored in the film and it is important to be aware of this as the title screen states the simulated epilepsy tests can trigger an attack in the viewer.
Aside from this, Thelma is a darkly brooding film that combines psychological horror with breathtaking visuals entrenched in symbolism. There is violence, there is sexual exploration, there is a discomforting look at the power of religious self-flagellation. Starring in the lead role is Eili Harboe, whose performance is stunning. Truly a must-see if you are a fan of Norwegian filmography. Also, can we talk about how horrific that lake scene is?

The Way He Looks (2014, Directed by Daniel Ribeiro)

This Brazilian film was released in 2014 and presents the coming of age story of Leonardo, a blind high schooler attempting to gain some independence from his overbearing parents. A warning in advance for anyone watching during winter: this film involves a lot of sunbathing and swimming, so prepare to become rather bitter about the state of Dutch weather and/or November in general.
In any case, when a new student by the name of Gabriel appears in the seat behind Leo, something entirely new is awakened in our protagonist, adding an extra layer of uncertainty to an already complex journey of self-discovery as he attempts to work his way through the discovery of same-sex attraction. The story is well-written, well executed and inhabited by a cast of likeable characters, such as straight (and oblivious) best friend Giovanna; generically blond villain character Fabio and, finally, Leo’s well-meaning – if rather overprotective – parents.
Overall, this film is a heart touching display of the first steps towards selfhood, with a sweet ending and organic blend of humour and seriousness, and is definitely to be recommended. Especially if you just watched Thelma and need something that doesn’t make you question everything you ever knew about life.

At this point in the review one might be tempted to call out a certain Scandinavian bias in the list of recommended films, which I resent but do not ultimately deny. And I’m not even usually a fan of noire detective series such as Grenseland, what with the depressing tone and nihilistic view on corruption and death, not to mention its general lack of (metaphorical and meteorological) sunshine. What I am a fan of, however, is literally anything that shows Tobias Santelmann kissing another man, which this series gives me a full dose of within its first ten minutes.
Santelmann plays Nikolai, a police officer who is awaiting his witnessing against a superior’s corruption and is temporarily transferred from his post in the capital to one in his hometown to await the trial, only to be swept up in a murder that his brother turns out to be the perpetrator of. Pulled in by an ever deepening pit of lies and secrets, Nikolai attempts to protect his younger sibling from being arrested, only to learn his wily partner Anniken (played by the excellent Ellen Dorrit Petersen) is a lot more capable than she set out to be, as she begins to suspect foul play and circles ever closer around the real criminals of the case.
The setting of Grenseland is dark, cold and grey, both physically and morally, with characters as detestable as they are likeable, making it really difficult to make a choice between any of them. On the plus side, however, in the end you’ll probably be left feeling rather optimistic about your own life choices thus far, so there’s that, at least.

Any new submissions will not be reviewed until October. You can check out our Submission Guidelines page for more information.