You might already have heard of her through Instagram or Tumblr, or maybe you’ve seen her book lying beside all of the other ‘cool’ books in the book section of the Urban Outfitter’s store. Rupi Kaur is a Canadian author, feminist activist and illustrator in her twenties who has published two books of poetry accompanied by her own illustrations. She first caught my attention when I was scrolling through Instagram and saw a photo of a woman lying on a mattress with period-stained pants. The caption underneath the photo explained that this photo had previously been taken down by Instagram. Underneath the caption there were a lot of outraged people addressing how wrong it was of the social media platform to take down this photo but allow other (dubious) photos to stay. It’s safe to say that my curiosity was piqued—not often does one encounter something like this on Instagram. I was even more interested in who this person was when I discovered that she was a poet. Her ‘period’ photo[1] (this is how I’ll refer to it) gave her some sort of internet-fame—she currently has 1,8 million followers![2] What’s more is that this fame is very specifically tied to a certain demographic as her pictures were spread through Instagram, which is a platform mostly millennials spend their time on.

I can spend an entire article writing about her internet presence alone, but I want to get to her poetry as well. I should admit that when I first got familiar with her work I felt a slight cringe. This cringe perhaps lies in the fact that I am an old soul and don’t entirely trust people who gain their recognition through Instagram. Nevertheless, I pushed through that cringe and tried to look at her work with unbiased eyes. Her first piece of work, milk and honey, explores themes such as love, healing, abuse, heart-break and what it is like to grow up as a daughter of immigrant parents (she is of Indian descent). Her style of writing is very minimalistic: the only punctuation she uses is the period (if you have a strange sense of humour you can relate this back to her period photo, but I digress) and she doesn’t use a capital after this period. Again, I had to ignore my conventional view of what poetry is ‘supposed’ to be and respect her artistic choices. Still, I kept at it and, after doing some research, I found out that she was actually inspired by an Indian Sikh script that uses very few punctuation marks. She incorporated this style into her poetry to honour her culture. Whatever you think of this choice, I think that most people can agree on the idea that her poetry, written in free verse, reads like a diary that is quite easy for anyone to pick up and read. Looking back, I think that these grammatical choices make for a very relatable reading of her work; readers don’t feel like they’re reading a challenging body of poetry. You could say that her work is anything but pretentious. My first reaction was that it actually is pretentious! As I was reading I could only think about the fact that these stylistic choices were her way of coming across as ‘profound’ just for the sake of it.

Now that I’ve talked about the interesting grammatical choices that Rupi made in her work, let’s have a look at the content of milk and honey. Despite her simple and direct ways of writing, the themes that she writes about are often emotional, delicate, and some even assumed taboo subjects to talk about. Page 41, for example, only has two lines that left me feeling quite shocked and sad: “i flinch when you touch me/i fear it is him”. Although many will have critique towards her “Instagram” way of writing (which can often feel hurried and as if it were written on a smartphone), I also think that this direct approach to issues such as abuse is important—there is no hiding behind figurative language or room for alternative interpretation. The narrator is unapologetic about what she feels and wants the reader to know exactly that. As I mentioned before, I often felt like I was reading her diary; her deepest emotions are laid out on paper. This is perhaps another reason for why I initially felt so uncomfortable reading her work: a stranger tells you everything, the good and the bad things of their life. Even so, there is also a feeling of calmness. Some of her poetry resembles a Japanese haiku or like they were inspired by the 20th century Imagism movement where words were used sparingly and directness was a priority. Putting aside these short poems for a second, Rupi’s collection of poetry also has poems that are a bit longer. One of them almost resembles a sort of social media ‘rant’: “my issue with what they consider beautiful/ is their concept of beauty […]”.  The similarity between the language used on social media and the language use in her poetry made me realize that Rupi Kaur has perhaps reached an audience that uses social media on a daily basis to become interested in poetry, a form of literature often looked at as old-fashioned by many younger generations, and that in itself is quite an accomplishment.

Rupi Kaur’s work is poetry written in a time where social media accounts are checked on a daily basis. Her verses appeal to a large amount of readers as they are uncomplicated and straightforward. They are relatable because they read like someone’s thoughts on paper that tackle subjects that many of us deal with but don’t often talk about with others. The essence of her poetry is about the struggle and, eventually, the peace that humans face in our lives. 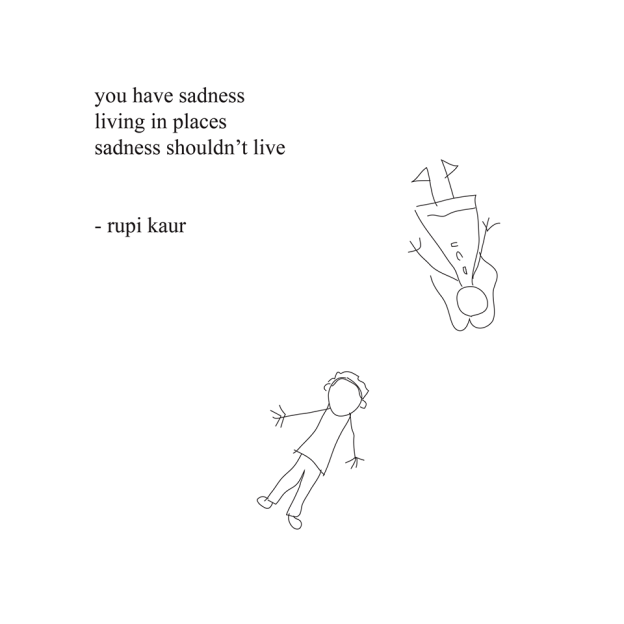