I guess you can say that this article came into existence by accident. A few weeks ago, one of the Writer’s Block board members texted me asking, “Are you watching playthrough videos again on YouTube, Roos?” I was shocked by this I know what you did last summer-level of clairvoyance and immediately paused the video of two Dutch YouTubers playing Harry Potter and the Philosopher’s Stone. Instinctively, I looked outside as though I would find him hovering near my bedroom window, but the purple stick figure in the right hand cornerdd of my screen told me that I was logged into the Writer’s Block Gmail account which meant that my entire videogame binge session could now be seen by the editorial board. I could not lie and tell him that it wasn’t me; earlier that year I had casually mentioned that during the Christmas holidays I watched a playthrough of some obscure Japanese RPG that I used to play as a child. So there were no excuses anymore. I was the only suspect. I felt caught and for some reason compelled to out myself as a person who spends her evenings watching YouTubers play Skyrim, or Kim Kardashian: Hollywood.

I am hardly special. Let’s Play videos are immensely popular on YouTube. I would say that the reason behind their popularity is simple but admiringly genius. Condensed into short bite-size videos that are flavoured with humorous commentary and clever editing work, Let’s Plays are cheap and easily digestible shots of entertainment. Consuming them is like eating a pack of chocolate raisins: the craving not only comes from the taste itself but also from the fact that your appetite is never satisfied – there is no resolution, no satisfaction, no catharsis, only the illusion that you have eaten something and the nagging feeling of wanting more and more. And so, unsatiated and high on the sugar rush you keep grabbing from the bottomless pack of candy that is YouTube.

I don’t mean to downplay the creativity, comedy, and effort that goes into Let’s Play videos. Really, the way the humor relies on satire, absurdism, irony, slap-stick, and incongruity is quite fascinating. Perhaps the best way to illustrate this is by painting a picture of the muse of all Let’s Play videos, Grand Theft Auto[1]. Though often criticized for its alleged glorification of violence, reducing the game to vulgar brutality would do it grieve injustice. Through its vast open world that lies in the hands of its players, and its occasional glitches, the game can just as easily be turned into a cacophonic train wreck. Taking the Let’s Play from ruling gaming king PewDiePie as an example, we see his character getting eaten by a shark, going on a glitch-induced flight around town like a flying squirrel, crashing a propeller aircraft into a zeppelin, and body slamming the bouncers of a strip club, all within a mere 7 minutes.

As a control freak and someone who always tends to play by the rules, I revel in this inclination to complete anarchy. Both in the real and the virtual world, this has never been really my style. When I played The Sims as a child, a game which is, like Grand Theft Auto, known for its susceptibility to falling into a hell pit of utter chaos, my nuclear Sim families enjoyed a perfectly comfortable bourgeois life. In their safe suburbia, they were sheltered from the horrible daily realities that their kind underwent in other computer universes. However, in the company of my friend, I would fervently watch how she came up with the most original ways to make the lives of her Sims as horrible as possible. At home, I had absolutely no interest in seeing how long my Sims – Hillary Lohan, Britney Lopez, Leonardo Timberlake and Brad Michael Murray – would survive in a windowless 4-square meter room with nothing but three stereos constantly playing country music. They were far too humanized to fall victim to this kind of torture. But being in the company of a close friend who called her Sims Poopface, Weestain, and teacher assistant Jolanda made it lot easier to watch them burn to death from a fire caused by a cheap kitchen stove.

This might sound as though we had a lot of issues, but basically what has always attracted me in watching people create carnage on The Sims and GTA is not its cathartic effect but the way its players maneuver violence into the ludicrous and the carnivalesque. In the gaming world of Let’s Plays, violence is the arena of outrageous comedy: slapping an innocent pedestrian on GTA has the same comedic effect as Mr. Punch falling victim to Judy’s club. Essentially, these types of Let’s Plays are the slapstick comedy of the 21st century. Their humor does not rely on the cruelty an sich but on the exaggerated physicality that exceeds the boundaries of normal behavior. Through glitches and the imperfections of game programming, videogame characters move through their virtual world like Buster Keaton: they stunt around awkwardly yet invincibly, (un)intentionally hurt other people, and create a never-ending chain of absurd and unexpected situations. 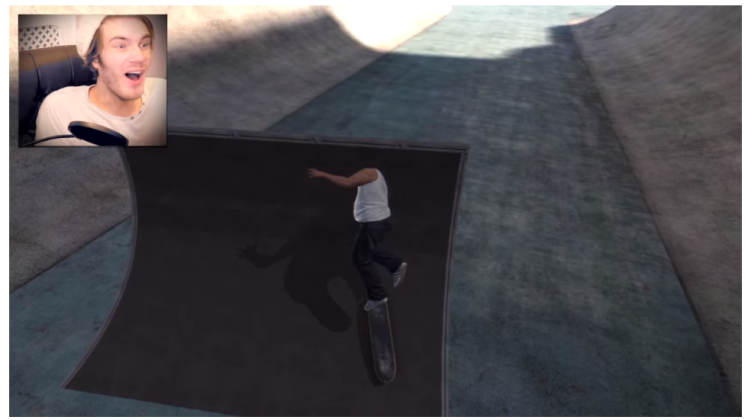 Of course, Let’s Plays come in all sizes and flavours, and don’t always involve this kind of horseplay. Perhaps the most remarkable gamer on YouTube is 82-year-old Shirley Curry from Virginia, USA. Watching Shirley play Skyrim and Tomb Raider is like watching Bob Ross painting his way through mountain landscapes. You find yourself in a warm embrace of overelaborated commentary where we take our time and mistakes are accepted as happy little accidents. There is no mucking about, or short and snappy edited videos happening on her channel. Shirley likes to explore the game to its fullest and genuinely enjoys all the details of the game. She can spend a solid minute talking about the rain dripping from the bricks of a building, or bugs gathering on a stone wall. In her playlist “Shirley After Midnight”, she tackles horror games with inexhaustible determination and an awe-striking nonchalance. Having climbed out of a pit of blood, gore, and corpses, Shirley takes a brief moment to contemplate the sewer pipes: “look at these pipes. They gotta be copper because look at that green on there. That only forms on copper.”

Though I suppose the main idea of Let’s Plays is to work up your appetite for playing games, for me this idea doesn’t sound as appealing. Yes, instead of watching people crash into ramps on Skate 3 or explore the wonderful world of Goat Simulator[2], I can seek out these moments on my own. But that isn’t nearly as fun. I like the element of surprise and the sense of uncontrollability when you leave the course of the game in someone else’s hands. Besides, in Let’s Plays there is a feeling of shared enjoyment and everything is funnier when you can slap someone else’s knee while laughing. Perhaps this is what Johan Huizinga meant with homo ludens; we are attracted to games, even only as an onlooker, because it is so intrinsically human.