The editorial board of 2016-2017 would like to introduce itself to you! First up: Editors-in-chief Paul Hofma and Roos Gravemaker.

Oh gods, I have to actually write something about me? Well, that’s new. So, hi: resident scientist and brand new Editor-in- Chief Paul here! Together with my fab co-EiC Roos I’ll be spearheading the new Writer’s Block board for this year. Basically, that means it’s my job to be lording my newfound powers over everybody as much as I possibly can – preferably by having them meet deadlines. ಠ_ಠ

As for me, I’m bit of an oddball in the Writer’s Block board, being a Master’s student in Physics, for example. Also, I’m crazy about rowing – if I could row every day, I probably would. As it stands, free time is an absolute lie: between studies, rowing, and Writer’s Block, I don’t have much time left except that tiny bit set aside for eating and sleeping. I do it all with passion and love, though, so it’s been a blast so far.

Writing is love, writing is life – but poetry is the bestest life. While I’m currently (read: permanently, and with shifting attentions) working on a long-form prose project too, my poetry is definitely my true love.

And, on a final note: coffee. 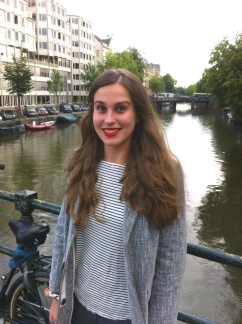 Having just finished my BA English and studying now for my MA Literary Studies, I will be the Editor in Chief of Writer’s Block this year together with Paul. The reason why I wanted to study English is embarrassingly cliché but true; from the age of sixteen I became obsessed with the Jane Austen novels. Luckily, my literary interest now reaches beyond 19 th century romanticism, so I don’t intend to end up in a worrisome relationship with some ultra-rich male entrepreneur whom I had to interview for the college newspaper because I had to cover for my friend/ roommate who got ill. Having escaped this Fifty Shades of fucked up scenario, I love authors that make me laugh like Roald Dahl and David Sedaris, but I also have great respect for the works of Zadie Smith, Chimamanda Ngozi Adichie, and Hillary Mantel. Apart from books, I like to watch British detective series, and because of my for love Amy Winehouse I just started to listen to Ella Fitzgerald and Billie Holiday as well. Movie-wise, I like all genres as long as it doesn’t have any creepy dolls in it. When I am not reading, vicariously solving crimes, or having sleepless nights over the puppets in Dark Chrystal and Spitting Image, I like to bake, go on cycling trips on my mountain bike, and go roller skating.