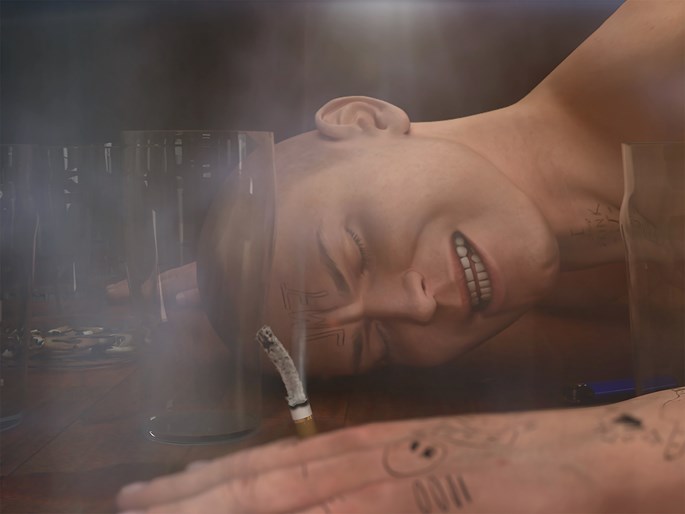 Although the majestic works of Henri Matisse have been luring numerous visitors to the Stedelijk Museum, it is its basement that confirms the experimental and contemporary course that the museum has set out to follow when Beatrix Ruf took up position as director last November. Titled Recent Ouija, the exhibition of the works of Ed Atkins (Oxford, 1982) encompass several enormous HD digital video projections including a hyperreal protoganist, identical to what one would call an avatar–a blue-eyed skinhead named Dave (although Atkins himself prefers to leave him unnamed).

Ouija, a combination of the French and German word for ‘yes’, refers to the late-nineteenth century board used for communicating with spirits. Judging on its title, Atkins suggests that his works, or rather the screens of his works function as a contemporary communication board between observer and virtual reality. I say virtual and not digital, because standing in front of the work’s vastness feels like you’re walking through Grand Theft Auto. Vertigo.

Nonetheless, while at first glance the virtuality of Atkins’ works seems to suggest a potentiality of virtual embodiment, very much like gaming, they strongly emphasise the confrontational relationship between the digital potential of new technological media and our physical being in the real world. Although Dave is hyperrealistic–he drinks, farts, sings, and curses–the artist continually confirms that Dave is merely a virtual character: in Ribbons (2014), Dave gets punctured, leaving nothing but a deflated head after begging from his audience compassion, understanding, and pity for 13 minutes. It is also because of the surrogacy of Atkins’ characters that they become “stand-ins for real people, and because they’re not real, I feel able to do more to them, treat them worse in a way”, Atkins discusses in an interview.

A second element of his art works is its linguistic aspect. Like mentioned before, Dave sings and curses, even gets mad on occasion. Welcomed by a gigantic avatar, this time with long black hair, Atkins’ Warm, Warm, Warm Spring Mouths (2013) at the entrance of the exhibition repeats the same monologue over and over again in different scenes: I don’t want to hear any news on the radio about the weather on the weekend. Talk about that. Once upon a time a couple of people were alive who were friends of mine. The weathers, the weathers they lived in! Christ, the sun on those Saturdays. Even though the screens are set up in their own individual rooms, they seem to interact with each other on linguistic level. As the protagonist on the entrance screen states That Leonardo DiCaprio looked like a fucking gun, the first notes of Elvis Presley’s You Are Always On My Mind are channeling from another room until somewhat later you find yourself in the next listening to a drunk Dave singing Bach’s Erbarme Dich.

Atkins writes the texts himself, performs these then in front of a camera with a computer programme that turns his face into an avatar, a surrogate. He doesn’t want to speak for anyone else besides for himself and for that reason uses his own voice and face. Recent Ouija is more than subversive and experimental–after all what kind of contemporary art is not trying to be. The exhibition assumes a paradox in the representation of human lives in contemporary digital culture by exhaustion and hyperrealism. Not just in the Pynchon way or by literally blowing up objects like Jeff Koons’ Inflatable series, but by using himself a questionable medium of technology, Atkins is a pioneer in challenging the medium by exhausting its representation to the fullest. The paradox of performance art has been discussed for many years now, but Atkins shows how relevant this paradox still is: instead of only questioning the artificiality or authenticity of art, representation, and performance, he also tries to grasp the line that divides the two and liquefies it. And though a cursing, singing virtual Dave lamenting might not be inviting or friendly, Ed Atkins’ works are hauntingly beautiful because of that.