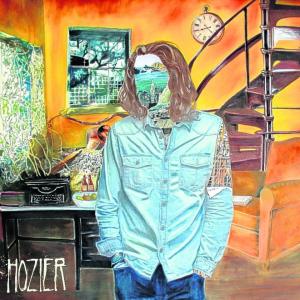 I was rather late to join the Hozier bandwagon. So late, in fact, that when I recently sang Take Me To Church at the top of my lungs, my 11-year-old sister was baffled I even knew the song. (Is my pop culture knowledge now, at the tender age of 19, inferior to that of an elementary schooler? Ouch) But now I know it and I like it. Or perhaps “like” is not the best word exactly. It is a fairly multi-layered song and I… let’s say I acknowledge and appreciate it. I was intrigued by Hozier’s deep, almost syrupy voice and headed over to Spotify to give his first album, Hozier (2014), a listen.

As I expected, the album opens with Take Me To Church, a song about love and obsession with the object of the singer’s desire: not exactly an original concept. Nevertheless, it is unique. Hozier describes his lover along the lines of a metaphor. She is a religion, her body a church and loving her, or making love to her, is worship. The powerful instrumentals, mostly piano, bass and drum, underline his strong vocals and the darkness of his descriptions.

Not all of Hozier’s songs are as dramatic (and I mean this in the best possible way). Some are tender (In A Week), some upbeat (Angel of Small Death and the Codeine Scene), some quite shocking (To Be Alone). They do, however, stay true to his forceful, brooding folk style. Hozier also establishes himself as a good songwriter, not just a good singer. I love his use of, for example, assonance and alliteration in Angel of Small Death and the Codeine Scene: “Calling to join them the wretched and joyful.” Sentences like these really come to life when heard, so citing them isn’t doing them much justice. You’ll know it’s good when you’re listening.