I, like most University students, and in fact most people, enjoy a good cup of coffee. When it’s been a long night, and that lecture just can’t quite seem to keep your attention, one dose of the ol’ midnight brew will get you pepped up, alert and awake. Most of us just take it for granted on the basis that it simply always works, but as usual in Passionately Curious, I like to go a step further: how does it work?

As you probably know, the active ingredient in coffee that makes it so darned addictive is caffeine. Or, as your chemist friends (hush you, I’m a nerd, I have chemist friends) might like to call it: 1,3,7-trimethylxanthene. Despite the awesomely complex sounding name this is actually a fairly simple, cute little chemical, which might not necessarily seem like anything out of the ordinary. So how come it has such a peppy effect on the user? To understand that, we’ll have to dive into your brain! Figuratively, that is. You see, your body naturally produces a chemical called adenosine, which bonds with certain receptors in your brain. When it does so, you start to feel drowsy. Caffeine looks a lot like adenosine, which allows it to bond to the same receptor cells. However, the cells don’t react to adenosine like they do to caffeine: the part where they make you sleepy never happens! As the caffeine sticks to these receptors, it will block the way for adenosine to bond to those cells, leaving your brain alert and pepped up. Suck it, adenosine! 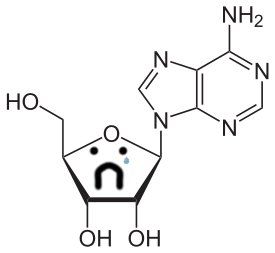 A single coffee bean contains about six milligrams of caffeine; a single cup of coffee usually contains about 150 mg of caffeine – so a net worth of about twenty-five to thirty beans. In practice, a typical cup of coffee may require up to seventy beans to brew; a waste of beautiful caffeine! In fact, it’s a beautiful waste of money, really: all of the top coffee-drinking countries need to import their coffee, as it can only be commercially grown in an area called the Coffee Belt, which stretches between the tropics of Cancer and Capricorn. However, most of the coffee produced is consumed by people living outside the Coffee Belt (about 70%). In fact, the USA is (as might be expected) the biggest coffee-slurping machine in the world, with almost 1.3 million metric tons of coffee consumed per year. That’s more coffee than would fit inside the Empire State Building! The Netherlands, though, certainly holds its weight in the coffee-drinking world: while we may not have the greatest total consumption due to our tiny population, we’re one of the biggest consumers per capita with 8.4 kilograms of coffee per year, ranking fifth just behind all of Scandinavia. It’s all still peanuts compared to the global coffee consumption, though: 6.2 billion liters – if we stacked that much coffee on top of a soccer field, we’d get a block of coffee standing ten kilometers tall.

My brain crashed trying to comprehend a giant block of liquid coffee, so here is a picture of a cat. Look at those eyes. Give him your coffee!

But woe is us; here come the people shouting “coffee is a drug! It’s addictive and bad for your health! And what about those people who die from caffeine overdose after downing too many mana potions™?” Whoa, let me stop you from worrying further right there.

Coffee is, in the medical definition of the word, not addictive; no matter how much some of you might feel like it is. You might get a headache or suffer major crankiness if you have to abstain from coffee while usually running on thirty cups a day, but that’s all in your head: your body can still do perfectly well without caffeine. As for the “dying from coffee overdose”: don’t worry, the toxic dose of caffeine is about six to ten grams for an average adult. Taking a nice medium of eight grams, that’s a whopping 50 cups of coffee (for the more magically inclined among us: even the more ‘extreme’ energy drinks tend to contain up to 300 mg of caffeine at most, which means you can ‘only’ drink about 25 of those before entering danger zone). Finally, the fact that coffee should pose health risks is actually mostly unfounded: in fact, drinking ‘normal’ amounts of coffee has been proven to positively benefit your health, decreasing risk for cardiovascular diseases, diabetes and Parkinson’s disease. Regular coffee consumption might even lower risks for certain kinds of cancer!

All in all, it’s a done deal: we love coffee, and the coffee loves us right back. In the words of mr. Gaiman: “Black as night, sweet as sin.” Now, if you’ll excuse me, I’m off to pour myself another cup of sweet, sweet sin. My adenosine can suck it.