Look, I wasn’t planning on doing monthly anime reviews. Truth be told, I kind of hate anime overall. Whether it be shōnen, shōjo, or whatever—I will never be able to get over the standard tropes like “magical girl” transformation sequences, “harems”, or the closely related (not to mention, hypersexualized) fanservice that gushes from every facet of the modern anime industry. It is this repetitive, inbred, formulaic approach many studios stick to which I hate. “Hate” is a word I don’t like to use often either, so when I say that a specific anime series is good, you’d better believe that it might actually be decent.

That said, Ghost Stories (2000) is not one of these decent shows. Watching it is submitting yourself to twenty episodes of tedious, uninteresting, Scooby-doo drivel. There are no interesting characters, the plot per episode is jumbled, and it is filled with more clichés and tropes than you could shake a stick at. At the end of the day, however, the show still isn’t bad enough to be considered “so bad that it’s good”, or anything along those lines. It’s stuck in, what I like to call, mediocre-limbo.

To summarize in short, the plot of the show revolves around a couple of high-school kids who stumble into an abandoned building and run into ghosts. When they discover that their entire town is practically swarming with ghosts, they end up trying to “defeat” them, either by capturing or banishing them. It’s a kids-friendly, supernatural/horror show. The Japanese version, that is.

Skip forward to five years after the original release, when a studio by the name of ADV Films received the rights to produce an English dub. One would have to see in order to believe what happened.

The first thing one should notice is that the official American dub has taken immense liberties with the script, going as far as to burn the original in its entirety (figuratively—though I wouldn’t be surprised if they actually did). There were only a few rules the scriptwriters had to stick to, mostly retaining to the characters’ names not being altered. Other than that, there were almost no limits. As a result, the show is filled with dark humor, sexual or generally inappropriate themes, brought to life through over-the-top voice-acting.

The latter is arguably the reason for the show’s cult-following: all of the show’s central characters’ voice actors have been credited with scriptwriting, since most of their lines were ad-libbed on the spot. The result is a once-in-a-lifetime oddity of hilarious splendor that has fans watching the show years after its release. 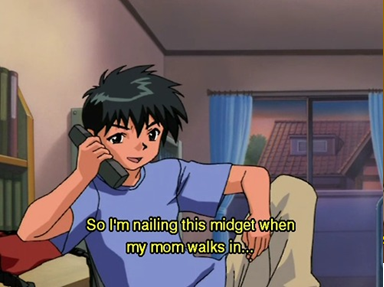 The original main characters, who didn’t have all that much character to begin with, were all given their own voice with the dub, both literally and figuratively. The conversations and relationships in the original series don’t reveal a lot about the characters’ inner workings. They were one-dimensional, each of them graced with a single character trait which was subsequently milked for the rest of the episodes. This meant no character arcs, no character development. The episodic nature of the show made sure that whenever a character did have an experience that could have been significant to them, it was dropped in the next episode, where everything would fall back into the same, boring status quo from the show’s start.

It should then be noted that, while the dub is not only significantly more impressive in terms of dialogue, it also does a better job at developing the characters compared to the original. For example, take the ad-libbed, absurd backstories which are revealed throughout the episodes for the main characters:

These descriptions should also serve as an example of how crude and self-deprecating the show can get. Most of the humor comes from poking fun at the original version, especially to how little depth there is to the characters. Still, as the series starts off, you can see that the creators of the dub were initially trying to stick to the original to a certain degree. It’s just that there’s an occasional line that will jump out in a way that’ll have you thinking, “Did he just say that?”

These kinds of lines just happen, and the show continues as if they didn’t. But as the story starts to develop, less and less care is put into evoking the original script. Running gags take over (e.g. Keiichiro being mentally handicapped, Leo being a Jewish stereotype, etc.), and characters become more brutal with each passing minute. There are also a fair number of fourth-wall breaks, in which the characters comment on the ongoing episode, or reference to each other as voice actors.

The only downside to this breakage might be that the show uses a lot of references for its comedy (Christian Slater’s career notwithstanding especially). The dubs stems from 2005, and as such the references might be a bit dated from time to time. Still, it’s the only critique I could think of in terms of comedy.

Watching this series, there was just one question on my mind, one which undoubtedly haunted the minds of those watching it when it first released: how did this happen?During a Q&A, upon being asked what the script-writing process was like, Greg Ayres (one of the voice actors of the dub) summarized how the show came to be:

“ADV got the rights to a show called Ghost Stories in Highschool. It was…putting it nicely, a turd of a show. Even the Japanese, when they licensed it, told us, “Look, this didn’t do well on TV, you may have to work with this show a little bit.” And they (ADV Films) asked “What can we do?” and they were like, “You can do whatever you think will make this show sell.” …That being said, we tore the butt out of that show.”

A concise way to put it, I’d say. Though there might have been some initial conflict over the way the show turned out, the comedy did manage to hit its mark. Nowadays, the amount of fans of the dub vastly exceed the fans of the original series. It should be mentioned that the initial public reaction to the dub was utter confusion; fans of the source material (the book series by Tōru Tsunemitsu) wanted to see this dub buried, and buried deep. Sadly for them, the original show doesn’t seem to be worth all that much discussion, as almost none can be found these days. The original studio licensed and accepted the final version of the dub, after all, and there has been no word from their side ever since.

In conclusion, Ghost Stories (2000) is probably the only anime I’d recommend to watch dubbed. The only thing that springs to mind in terms of comparison would be popular online “abridged series” such as that of Yu-Gi-Oh! or Dragonball Z. The only difference being that this show is basically a professional “abridged series”. That, and the fact that it is a whole lot more offensive. In all seriousness, this show might not be for you if you’re not into more edgy, less tactful humor. The show has a lot of dark humor which can surprise you even going into the later episodes. Funnily enough, the running gags the voice actors come up with serve as arguably more character development than the characters in the original show get. The dub is not only an improvement; it is the definitive version of the show. At least, that’s my opinion. Honestly, the only thing that bothers me about the existence of this show is how it makes me wonder why professional “abridged series” isn’t a genre of itself. But until then, let Ghost Stories (2000) remain the unique yet lonely series of its kind.